2017 was another good year for new metal releases… this is what it looked like from where I sit: 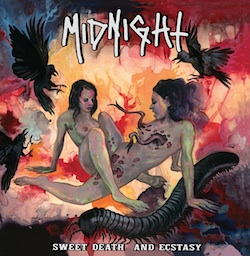 1. Midnight – Sweet Death and Ecstasy. Midnight plays blackened speed metal that’s a coked-up cross between Venom and Motörhead, with an extra side of Satan and a manic, gleefully blasphemous feel that’s all their own. This album is par-for-the-course for Midnight: rabid vocals and bluesy, blitzkrieg solos over a stripped-down, high-speed/low-drag rhythm section, the pace driven hard by relentless rock-style drumming. Tempo variations are placed with an almost preternatural accuracy to wreck your neck. As always, the whole is enlivened by the pleasantly dirty, rawish production that Midnight is known for. Another year, another reminder that Midnight does not disappoint. Standout tracks: Bitch Mongrel, Melting Brain, Before My Time in Hell.

2. Power Trip – Nightmare Logic. Neck-snapping, slightly dirty-sounding old-school thrash from Texas. Crushing monster riffs punctuated by the occasional blistering lead and hoarse, deep, shouted hardcore-esque vocals that remind me a lot of the first two Black Breath LPs. Most songs show nice use of tempo, including two absolutely killer breakdowns; both are properly followed by tension-inducing steps up in tempo, rather than being breakdowns for the sake of having a breakdown like the kiddies do. Old-school Nuclear Assault guitar tone. Standout tracks: Nightmare Logic, Firing Squad.

3. Phrenelith – Desolate Endscape. This is the first full-length release from these Danish dealers in death metal, and I think that I would be hard-pressed to distinguish between this and Dead Congregation in a blind taste-test, as the material, timbre and production are so similar (this is not a bad thing). Song structures generally use alternately blasty and doomy sections to create and resolve tension, and there are plenty of Swedeath-style tremolo-picked passages that have their own internal tension (playing a slow melody using lots of very fast notes), so the music has a gratifyingly purposeful feel. Sections of thrashier riffing and the use of minimalist-but-effective thematic leadwork add atypical contrasts that keep things interesting. A dirty, cavernous production lends the sound an extra heaviness, and the harrowingly low-pitched drawn-out guttural vocals counterpoint the more manic feel of the music. Standout tracks: Channeling a Seismic Eruption, Crawling Shadows Slithering Tongues, Desolate Endscape.

4. Cannibal Corpse – Red Before Black. This beefy slab of technical/brutal death metal is my favorite of the last three Cannibal Corpse albums. CC has been nothing if not consistent over the last decade, but there are a few albums that stick out from among the rest, and this is one of them. Red Before Black has it all, everything that CC has to offer, from the crushing riffage of Only One Will Die and the raw speed and violence of Firestorm Vengeance to the deliberate initial/terminal grind of Code of the Slashers and the self-described lethal “Cannibal groove” of Shedding My Human Skin. As usual, everyone is on top of their game, and the production is typically immense and weighty. Standout tracks: Only One Will Die, Code of the Slashers, Shedding My Human Skin.

5. Paganizer – Land of Weeping Souls. This is Rogga Johansson doing what he does best- thrashy death metal with a full, low-end-heavy production that harks back to the Big Four of Swedish Death Metal (though there is a bit more filth in the sound). Cavernous yet semi-intelligible vocals drift above the chainsaw-timbred melee like an ill-omened mist over a fell mire filled with hidden death and the corpses of the fallen. While in the main this is thrashier than a lot of classic Swedeath, it affirms its roots with tremolo-picked passages, plenty of maddened old-school Swedeath leadwork (the little bit at 1:45 in Prey to Death is sublime) and sparing, effective use of traditional atmospherics. Standout tracks: Prey to Death, The Buried Undead.

6. Necrot – Blood Offerings. I’ve looked forward to Necrot’s first full-length album since 2016’s The Labyrinth compilation, which grabbed the last spot on my Top Ten last year. This is great mid-paced death metal, even better than I expected from the comp. The drumming pushes things along nicely, using the double-bass with a tasteful sparingness and largely avoiding blastbeats, choosing to be interesting rather than overusing (and abusing) commonplaces. The well-varied riffing is nice and thrashy in places; this combined with well-chosen timing changes produces a high bangability factor. The production is the bastard child of Autopsy and Entombed, not completely caverned-out but not completely clean either, with the vocals inheriting the most Autopsy DNA. It’s easy to make boring death metal, Necrot do it right. Standout tracks: Rather Be Dead, Blood Offerings, Beneath.

7. Entrails – World Inferno. There’s no mistaking where these guys are from; they play classic Swedish death metal so authentically that you’d think that they picked the name so that they’d end up next to Entombed on the shelf; this similarity in name is especially apt in that they sound more like Entombed than any of Entombed’s contemporaries. This style of death metal has a special place in my black little heart, and Entrails always scratches that itch. This album is not my favorite from these guys (that would be 2013’s Raging Death), but it is rock-solid from the chilling intro (exactly what I imagine a world inferno would sound like) to the last hauntingly triumphant notes. Standout tracks: all/none.

8. Decapitated – Anticult. I know most everyone dislikes this album (when I mentioned their then-recent arrests to a buddy, his response was “What for? Did they outlaw making a shitty album?”). I get why. It’s completely different from the technical/brutal death metal that people love Decapitated for. In fact, it’s not straight death metal at all. More than anything else, it strikes me as a dirtier, somewhat heavier, groovier version of The Crown’s early death/thrash output. Hell, they’re literally channeling Pantera at a few points (see 1:10-1:25 in Death Valuation)- not what you want in your tech death. But the fact is, I love this style of death/thrash, and I have played the hell out of this album since it came out. Standout tracks: Earth Scar, Death Valuation, Kill the Cult.

9. Midnight – Shox of Violence. This compilation builds on 2016’s Shox of Violence EP, adding 21 more tracks, most of which are covers. If this isn’t Athenar deliberately showing his influences, it might as well be, as every cover song is a perfect fit for Midnight’s mein, readily soaking up the black sleaze and becoming a Midnight song as far as the ear can tell. The studio tracks are all great, representative songs that blend well with the covers (or vice-versa). Midnight comps are always a lot of fun, and this one is no different; I spent a lot of time cranking it on repeat waiting for Sweet Death and Ecstasy to come out. As with all Midnight comps, production is variable, starting with “a bit rawer than their LPs” and degenerating from there, so caveat auditor. Standout tracks: the end of Unholy and Rotten (live) where we get to hear the most ineffectual wanker on the planet try to bounce Midnight from the stage because of a lil’ ol’ fire.

10. Wolfbrigade – Run With the Hunted. This crust punk album is just what I like: stripped-down, high-speed, ass-kicking riffing with just enough well-placed tempo variations to keep you hooked for a brief rocket-ride, propelled in this case by driving, relentless D-beat drumming. The hoarse, barked, pissed-off vocals are exactly what the music needs, and the occasional piece of leadwork is as likely to be a slower thematic passage as it is a brief, to-the-point solo. The production is suitably raw and dirty, fitting the speed and attitude of the music perfectly… in short, there is nothing not to love here. Standout tracks: Return to None, Dead Cold.