I don’t pay a whole lot of attention to modern-day traditional metal. My tastes have gradually gotten more and more extreme over the years, and I honestly don’t have much interest in anything but death metal, black/hybrid stuff and a bit of thrash anymore, unless it’s an album that I grew up loving. Nothing against trad metal, it just doesn’t grab me now. Tastes change. 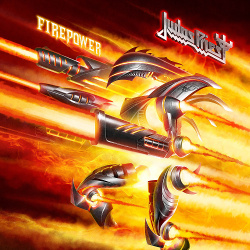 I guess, then, that it really says something about the new Judas Priest album, Firepower, that I’ve been playing the hell out of it since it came out in early March.

It’s not just that it’s the best thing that they’ve done since Painkiller; that stretch is definitely the weakest era of their 44-year-long discography. It’s that it is such a pure expression of where the Painkiller trajectory should have taken them next; it’s that, at the same time, it reflects so much of where they were at in the eighties- the past and the ideal future, the best of both worlds.

Even more, it’s that Firepower comes at a time when we had no right to expect such an album from them. Between the loss of some of the classic line-up, and the aging of the rest, it’s no disrespect to expect their glory days to stay obediently behind them. I don’t think anyone expected them to hit one so far out of the park at this point.

The music isn’t the only thing that impresses on Firepower. Everyone turns in an ace performance, and Rob Halford in particular sounds fantastic. The production is everything that you could ask for, and really makes the material shine. Crankability is sick.

Standout tracks: Children of the Sun, Rising from Ruins, Necromancer.