Every year, no matter how hard you try, some real gems are going to slip past you. With thousands of new metal albums coming out each year, missing something good the first time around is a statistical certainty. Terrifier’s 2017 album Weapons of Thrash Destruction is a perfect example of a Top-Ten-grade release that I missed last year. 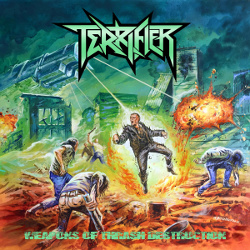 This is the second full-length album from these Canadian thrashers, and it is a beast! Terrifier play straight-up thrash: blitzkrieg-assault, high-speed, chunky-riff-laden songs punctuated by blistering leads and the occasional perfectly-executed tempo change or breakdown, all driven by punishing drumwork. While the music is clearly rooted in the “spirit of ’86,” it honestly kicks so much ass so consistently that there is zero “tryhard/retro” taint to be found; this is the real deal, not a modern imitation.

While most of the nine tracks would have fit in well on Kill ‘Em All or Bonded By Blood, there is a bit of variation on the theme. Drunk As Fuck is a modernism, being the requisite drinking anthem, and it does its job extremely well; the chorus riff sounds like Nocturnal Breed, which is completely appropriate. No cheese here, just an ass-kicking; you’d be hard pressed to find a better thrash drinking anthem. And Riders of Doom is a macabre, Metal-Churchesque little interlude that actually serves as a nice, contrasting lead-in to Sect of the Serpent, which is a right ripper straight out of the gate.

The musicianship on display here is top-notch. The riffing is razor-sharp, and the leads are downright enviable- timely, topical, and expertly executed with a bit of swagger. The drums, as fast as they have to be to drive this consistently breakneck slab of thrash, include some nice little fills and frills throughout, elevating them to the level of “kick ass” as well. The bass? This is a thrash album. No doubt it’s doing what it’s supposed to do, but you really don’t hear much of it (with the exception of one break on Bestial Tyranny).

The production is consistent with the thrash albums of yore in that it could use a bit more low end and a bit less top end. This is not a fault, that’s just the way it’s done. The guitar tone itself is aces.

This album would have claimed the number four spot in my 2017 Top Ten.